A downloadable Board Game

“You Are Found” is a 2 -16 player puzzle game where players are trying to shift rows and columns on a grid in order to put all players in the correct positions. The game ends after all players agreed that they have been found, or 16 turns have passed (whichever happens first.)

Divide the the Found Cards into two 16 card piles, each having their own full set of four shapes in four different colors. Shuffle up and deal one Found Card to each player. Each player should commit to memory what their exact color and shape is. After all players have their cards memorized, shuffle the second pile of Found Cards together again and deal them all face-up in a 4x4 grid.

Next - deal each player 1 Lost Card. The goal of the game is for each player to get their Found Card moved into their Lost Card Position.

The game ends after 16 full turns have been made, or after all players agree that they have been all found. (more on this later)

Actions - On a players turn, they may do two things in any order.

In this game, players are not allowed to use gestures such as pointing, and can not talk normally. Players can only use these following words in any combination of their choosing.

Meaning, players can create their own sentences such as “I am Found” and “I am lost” or can get creative, saying things like “Are you Lost?” or “Are you Found?”

Players are dealt a hand of 4 Found Cards and 4 Lost Cards. Players must then pair these cards up face down in four separate piles in front of them. The goal of the game is for players to achieve these set down pairs and then maneuver the board to do so.

Competitive: the player who achieves their 4 pairs first wins, (or has achieved the most by the end of the game)

Players are given Two Lost Cards denoting what space they are on the board and must push Found Cards to that spot to collect them. They are given an initial Found Card as their target,and after successfully moving that card to one of their pick up spots, they collect that card and pair it with the one in their had to be set aside to keep track of the score. Afterwords, they draw a new Found card as their new target to collect.

The player with the most collected cards at the end of the game wins!

playingcards-io-export.pcio 498 kB
You Are Found Print and Play Tiles.zip 467 kB 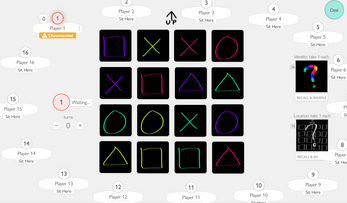